Ancient People of the Moor

When it comes to photography I always try to convince myself that no matter what the weather it's always worth going out. It is not always the case of course, but very often exploring a new place, looking for future viewpoints, or simply focussing on abstract details, or streams in spate, helps me feel I have done something positive despite the conditions.

Today was one of those days. I only came away with a few record shots as opposed to wonderful vistas and moody skies, yet it was still a brilliant day out and certainly well worth the effort despite the wind and incessant drizzle.

Carved out by glaciers an age ago Barningham moor is a wild and exposed landscape. Nowadays like much of the landscape in the North Pennines it is managed for grouse, but in Bronze Age times and possibly earlier it was home to a group of people we know virtually nothing about. What we do know is they must have led a life that was far from the on the edge subsistence lifestyle that is often portrayed when discussing the Bronze Age and beyond because they were also an artistic bunch and left us with some wonderful art. This is not your transient modern art if you know what I mean, this is "Rock Art" pecked into existence thousands of years ago with primitive tools. This art is not a five minute effort such as an unmade bed, a cow in formaldehyde, or a multi million pound painting that looks like its been done at pre-school and should be stuck on the fridge of some proud parent, as opposed to the wall of a museum. No this is art that required commitment and time and will have taken days, weeks and probably months of effort to create. The overall collection will most likely have taken many years, possibly even generations to put together. The reasons why our ancestors put their time and effort into carving cup and ring marks and building stone circles are not really understood. There are plenty of theories of course, burial cist covers, way markers and ceremonial stones to name but a few, none of which I might add are universally accepted.

Whatever the theories I like to think of these symbols as having a spiritual as well as a practical purpose for our ancestors. Perhaps some stones such as those with cup and ring marks (the rings symbolising ripples in water when you throw a stone in) were for springs providing safe drinking water, or water with some special significance. Others such as the grooves and cups could perhaps have been terrestrial maps of the area with villages, huts, tracks, or indeed burials marked. Perhaps they were even celestial maps of the stars which must have played an important part in their understanding of the seasons and therefore their lives. These symbols may have been left in their raw state, or may even have had natural colours added to enhance the designs and make them stand out? All the half baked musings of a layperson of course, but then the so called experts have little more to offer when it comes to why.

Viewing such art, which across the country ranges in date from 3,500 - 6,000 years ago tends to leave me with more questions than answers. Apart from the who did it and why did they do it? I also wonder what tools did they use and just as importantly where are the tools? What was the landscape like at this time, was it wooded, did these people live here permanently, or were these places summer camps? And on a miserably wet day like today, what was the weather like? With the cloud down and our hoods up to keep out the rain we made our way to the start of the steep sided Osmaril Gill, stopping every now and again to examine rocks for markings. On some rocks there were obvious markings, but on others the effect of relentless erosion over millennia made it difficult to tell the difference between natural and manmade shapes. Any passer by who did not know about the moors history would probably walk past many of these stones without a second glance, while the sceptical layperson would simply argue the markings were nothing more than natural erosion.

There are however several rock panels that leave you in no doubt that these markings are manmade and there is one rock panel in particular that lay undiscovered under the turf until 2006 that will convince even the most hardened sceptic. It was this newly discovered panel that was to be our first objective. Finding the panel was fairly easy using the GPS but would certainly have been easy to over look, the only sign being a few less distinct cup marks where a sheep track had worn away the vegetation. At this point it is worth mentioning that it is not acceptable to completely remove any turf or moss covering the panels, as it will expose the carving to the elements. In this case part of the slab is already exposed due to the sheep track and it is easy to gently peel back the already loose vegetation to reveal a significant part of the stone. 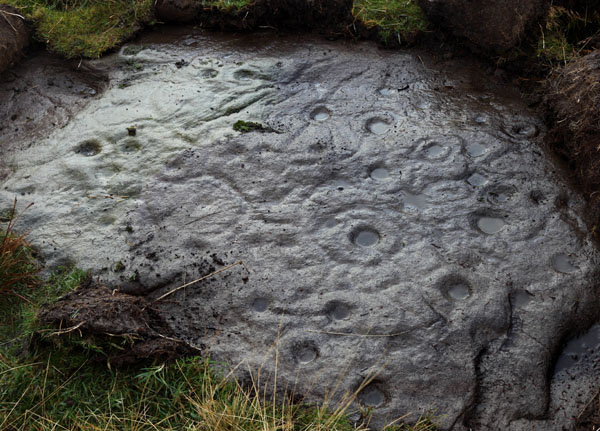 The recently discovered panel. Note the area with the green tinge to it where a sheep track has exposed it to the elements. Copyright David Forster

With wind, rain and leaden skies it was simply a case of capturing a few record shots of the parts of the panel where the loose vegetation could be gently peeled back and replaced before moving on to Osmaril Gill where a worn but still discernable cup and ring marked stone lay on the steep sided valley. 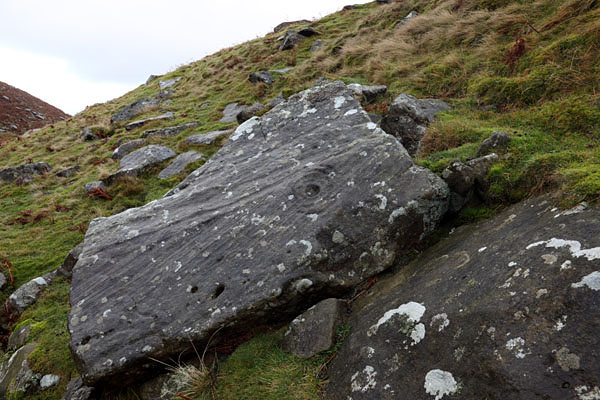 It is thought that this stone has slid down the steep valley sides over the years. Copyright David Forster 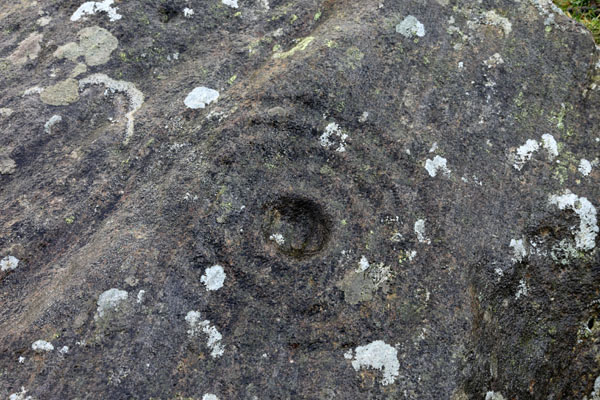 A closer view of the cup and ring marks. Copyright David Forster

Once found we again only managed a few record shots due to the weather before moving on to the stone circle at the head of the gill. Frustratingly the stones in the circle do not show fully as they are partially buried and coupled with poor weather again meant disappointment from a purely photographic point of view.

It's amazing to think that these cup and ring marked stones carved out an age ago by these ancient artists played a significant part in saving this wonderful piece of our countryside from destruction. In 1998 wind developers wanted to destroy the area by building twenty-five, 54m high wind turbines across the moor. Fortunately local people led by a lady called Elizabeth Mann managed to put together a compelling argument that these ancient stones and the landscape itself was worth saving. This campaign eventually resulted in planning permission being refused in 1999.

Moving onto Eel Hill we visited the final stone of the day. This stone has a deep cup carved in it at one end and a line of three cup and ring symbols running diagonally across it. It stands in a stunning position with extensive views over the plains to the North and East towards Teesside, the coast and most spectacular of all - the rising sun. 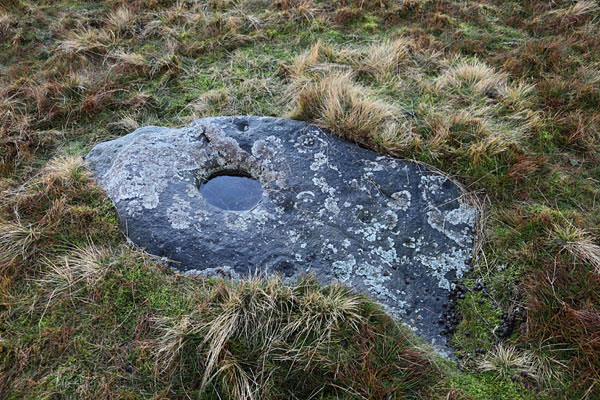 Sadly today there was little time to stand and stare, the grey clouds and an already darkening sky would mean a walk through the forest in the dark if we lingered too long. Despite wanting to get down before dark we were still on the lookout for interesting shapes to photograph and while descending the slopes of Eel Hill, our imaginations running wild, we spotted this head shaped stone staring out across the moor towards the north east waiting for the sun to rise. 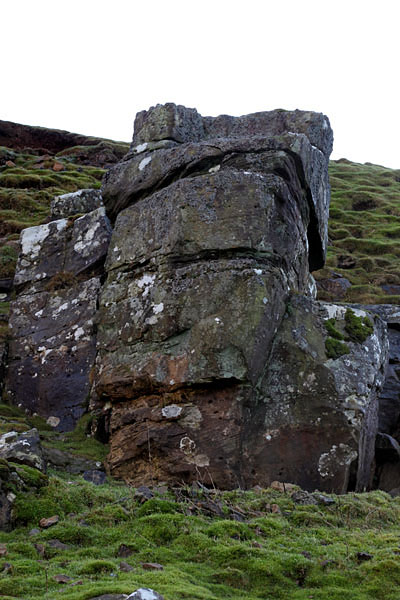 And just for fun - Osmaril's Head - Well it looks like a head to me anyway. I will leave it to your own imagination to decide if you want to link it to the people of the moor. Copyright David Forster

Further information on the area can be found on Alen's site Because they're there He has written several articles about his recent explorations on the moor.

All images and text copyright David Forster
Next
Previous