Commission your own original motocross painting, the ultimate gift or memento!
If you'd love to have an original painting of yourself - or your favourite rider - then contact Rob directly. He's only too pleased to take personal commissions, like the picture of the legendary Steve McQueen he's working on in the picture below. 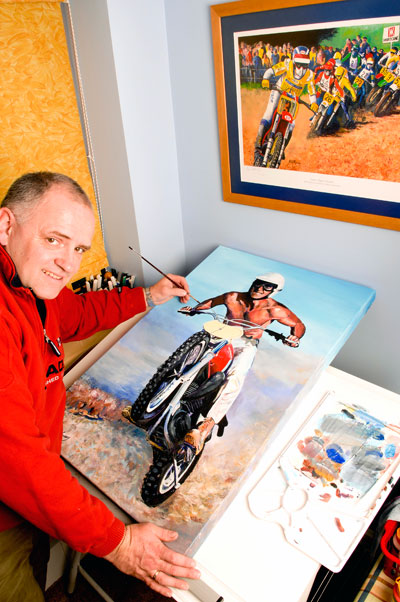 Private commission of Glenn McGovern at Namur Vet World Cup 2007.
My painting: "I love my Rob Kinsey MX painting and it is truly one of my most treasured possessions. (Beside my wife Erika, child Elena, my other kids.....and my Solva Suspension on my KTM!) I look at it every day and wish I was back racing in Europe, but I am too old, so says the FIM. I recommend Rob Kinsey as a motocross painter to anyone. I am still amazed how beautiful a piece of canvas can become due to Rob's amazing talent. It is better than any photo I could possess. Everyone is stunned by its beauty."
I really wish had it on my 15 ft. long 7.3 liter turbo diesel Ford box van but it would cause accidents due to the stares as it is so beautiful and unique!
Take care and stay in touch,
Glenn
.
GLENN McGOVERN


Painting for Moto tees which was made into a limited edition T-shirt design.
The original painting was bought by Ryan Villopoto's parents at Donington Park MXoN in Sept. 2008. 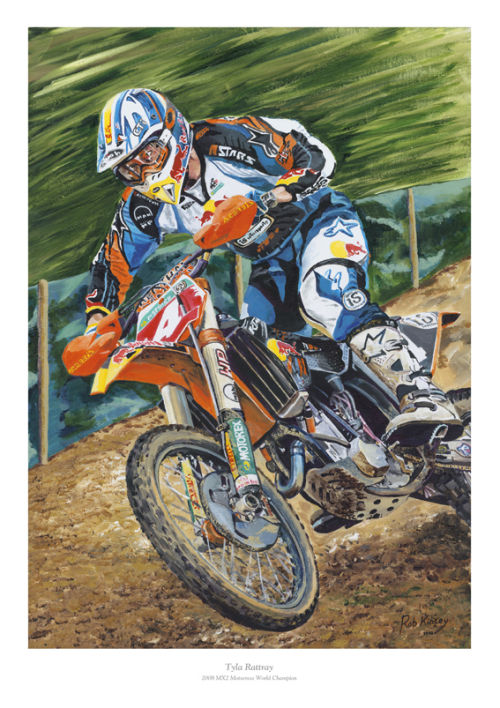 
Self portrait of artist Rob Kinsey on his 1978 Maico 440cc at Bodfari, North Wales.


Painting commissioned by Colin Dommett of his son Scott Dommett, a previous winner of the Scottish Pre 65 trial which takes place every year out of Fort William, Argyllshire.
Interesting features to capture were the dramatic pannorama of Scotland and the reflections, detail in the stream.


Joel Robert on his CZ commissioned by Rob Hooper.


Commission of his late uncle by Dave Kimmey of Engine Ice Inc. Florida.


Commission of Husqvarna 390cc illustration for Jeff Baggenstoss, Arizona that was also used as a T-shirt design. 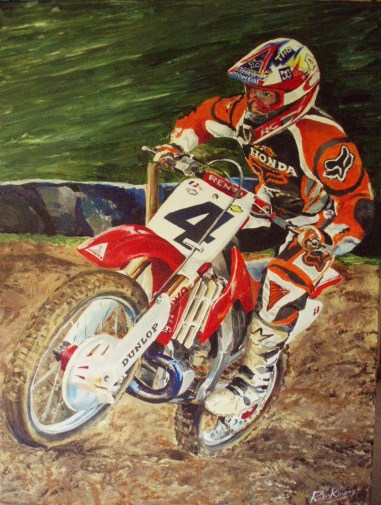