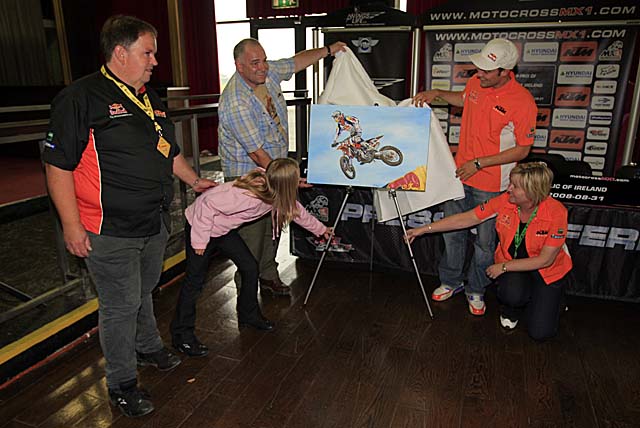 At the British Grand Prix at Mallory Park in June, Team Principal of KTM UK, Roger Magee commissioned British artist Rob Kinsey to paint a picture of Shaun Simpson to commemorate his successful season in 2008.
Roger and Rob searched through many of the Team photograph’s supplied by Ray Archer, looking for the shot that would capture Shaun’s style and energy. After much deliberation a photo was chosen from the British Championship at Foxhills and Rob began work.
Rob like’s to work in Acrylic paints on canvas. For Shaun’s painting Rob chose to work in a very detailed style, capturing all the fine detail of his KTM and clothing.
Once finished it was decided to add a small section of the Red Bull arch to give a sense of perspective and height to capture Shaun in the air.
The painting was presented to Shaun by Roger Magee and artist Rob Kinsey in a ceremony at the Irish Motocross Grand Prix, Fairyhouse Race course, Dublin on the 30th/31st August 2008 , filmed by Youthstream TV.
Limited edition prints will be available for sale and also given to the team’s sponsors as a thank you for their valuable support this season.