Tim Sullivan racing in Germany on his CZ whilst stationed there with the US army.

Long time friend of the late Jim Pomeroy and active vintage mx racer, Tim Sullivan from Canby Oregon, has bought the original Acrylic on Canvas painting of Jim Pomeroy on his beloved Bultaco at the 1973 Spanish 250cc Grand Prix.
Originally Tim bought a couple of prints of the painting, one to give to Jim's first girlfriend and for himself.
Rob contacted Tim to ask if he knew of anyone who might want the original? and Tim was quick to snap it up!
Said Rob, "I'm glad it's gone to one of Jim's close friends and I'm sure it will be appreciated and admired by many of his close friends up in the Pacific Northwest. 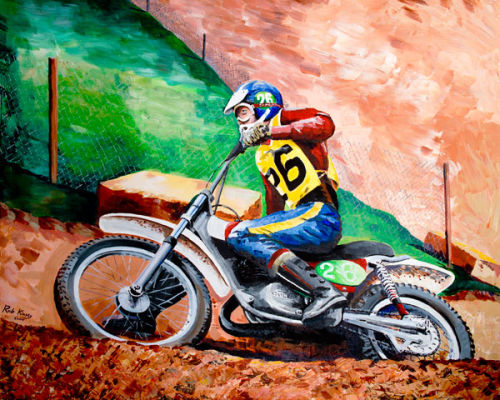